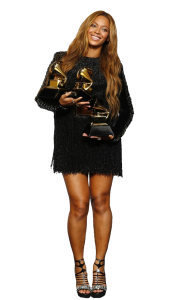 Beyoncé Knowles-Carter (1981-) is a famous American singer and musician. She began her musical career as a part of Destiny’s Child before breaking off to start a solo career. She is married to fellow musician and artist Jay-Z. She has won twenty-one Grammys, and some of her hit singles include “Halo,” “Crazy in Love,” and “Single Ladies.” In 2016, Beyoncé released her groundbreaking album Lemonade, which was taught as the topic of a Grinnell Tutorial later that year. At Grinnell, “Beyoncé Gardner” is a popular dance party where all the songs are exclusively by Beyoncé and people are known to dress up in Beyoncé’s iconic style.