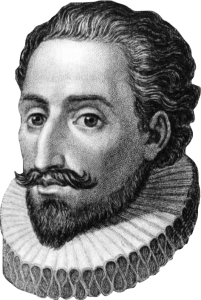 Miguel de Cervantes (Spanish/1547-1616) was arguably one of the greatest Spanish-language writers in history. His best-known work is Don Quixote, which focuses on a man with delusions of grandeur who believes that he is a knight, despite the fact that his horse is a donkey and the “giants” he believes to be fighting in one section are actually windmills. Considered to be one of the first great modern novels, Don Quixote has been translated into more languages than any book except the Bible.