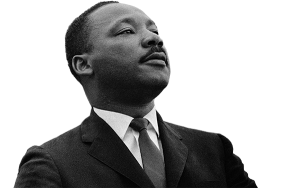 Martin Luther King, Jr. (American Studies/1929-1968) was a prominent American civil rights leader famed for his activism throughout the 1950s and 1960s. The nonviolent messages preached by King have been heralded by many, with his essay Letter From a Birmingham Jail (1963) and I Have a Dream (1963) speech considered as some of the greatest works in American history. King was famous for his speeches, even speaking at a Grinnell scholar’s convocation on October 29, 1967 giving a speech titled “Remaining Awake During a Revolution.” Sadly, King died for his beliefs when an assassin shot him in Memphis in 1968. However, King’s legacy as an American hero and civil rights icon remains alive to this day.