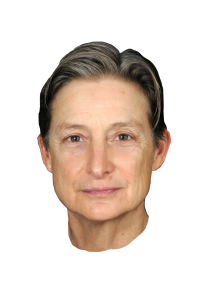 Judith Butler (Gender, Women’s, and Sexuality Studies/1956- ) is one of the most influential thinkers in the study of human gender and sexuality. Her work is foundational to both critical feminist theory and queer theory. In her seminal work Gender Trouble: Feminism and the Subversion of Identity (1990) and her subsequent publication Bodies That Matter: On the Discursive Limits of ‘Sex’ (1993) she argues that gender is a societal construct propagated to justify and codify the oppression of female, homosexual, and transgendered people by men. The crux of her arguments lies in her conclusion that gender is performative and is learned through gendered actions and speech that occurs from the start of a person’s life. She was Grinnell’s 2008 commencement speaker, giving an address centered on the nature of war, peace, and justice in the global community. She currently serves as the  Maxine Elliott Professor of Rhetoric and Comparative Literature at University of California, Berkeley.