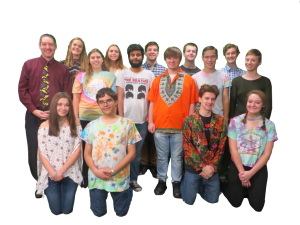 As 2017 marks the 50th anniversary of the album’s release, the Sgt. Pepper’s Lonely Hearts Club Band Tutorial analyzed The Beatles’ iconic album, examined the factors that influenced its creation and production, and discussed its relevance in both the 1960s and contemporary culture. Every day in class, a student or a guest would present a song from any genre or era to listen to and discuss. The majority of class time was spent analyzing each song from the Sgt. Pepper album and discussing readings about the historical context of the album. The class spoke about the continued relevance of the Beatles and made presentations about topics relevant to the album: Swinging London, The 1960s Counterculture, George Martin, and The Rolling Stones. Writing assignments included essays on early rock and roll music, analyzing Beatles cover songs, and an argument about the album’s significance in today’s culture. Multiple guest speakers visited the course to talk about pop art, the effects of drugs on the human brain, and how people develop intellectually and emotionally as they transition to college. By recording a cover of the title track “Sgt. Pepper’s Lonely Hearts Club Band,” the class was able to appreciate the many intricacies of the song, especially through the production and layering of the various instruments. A group of students that did not participate in the class’s cover song, who dubbed themselves “The Lindas” in honor of Linda McCartney, created a new version of the album’s cover with images from notable Grinnell alumni and people who represent the different majors and concentrations offered at Grinnell.