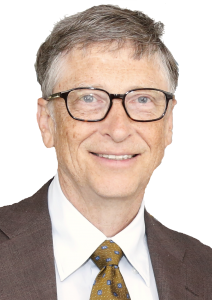 Bill Gates (Technology Studies/1955-) is one of the co-founders of Microsoft, the largest software company in the world by revenue, and one of the world’s wealthiest people. He helped make computers household items by writing software that made them usable by non-experts, whereas computers had previously been room-sized machines housed only by corporations and universities. He has also made himself known as a philanthropist by giving large portions of his wealth to charitable causes through The Bill and Melinda Gates Foundation, which focuses on poverty reduction, healthcare, and the expansion of American education. In 2014, he announced that he was stepping down from his position at Microsoft to focus on his work at The Gates Foundation.