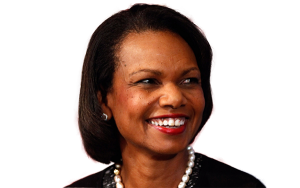 Condoleezza Rice (Political Science/1954-) served as Secretary of State under George W. Bush from 2005 to 2009. She was the first woman of color to become National Security Adviser and Secretary of State. In addition to her work in government, she has taught political science and served as Provost at Stanford University. Rice had originally attended college as a music major before deciding to study Russia, and she is an accomplished pianist.