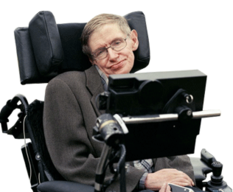 Stephen Hawking (Physics/1942-) was a British physicist known for his work in cosmology; his work led to theories about black holes, general relativity, and the creation of the universe itself. Hawking obtained his undergraduate degree from Oxford University and his Ph.D. from Gonville and Caius College, Cambridge. His best-known works include A Brief History of Time and The Universe in a Nutshell. Hawking struggles with ALS (Amyotrophic Lateral Sclerosis), a chronic degenerative muscle disease that affects his ability to move and speak. Although doctors gave him only a few years to live after his diagnosis at the age of 21, he is still living and working at the age of 75.