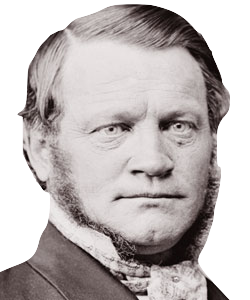 Josiah B. Grinnell (1821-1891) was a U.S Congressman, founder of the town of Grinnell, and a benefactor of Grinnell College. Born in Vermont, he worked as a farm boy until the age of 16, where he started teaching at a one room schoolhouse. He attended the Oneida Institute, where he became a staunch abolitionist. He was ordained as a minister in New York, and he started the First Congregational Church in Washington D.C. He was forced to leave Washington D.C after giving the first-anti slavery sermon in the city’s history. Grinnell’s most celebrated achievement remains the founding of the town of Grinnell, Iowa in 1854. He convinced Iowa College to move from Davenport to Grinnell. In 1909, Iowa College would be renamed Grinnell College after him.