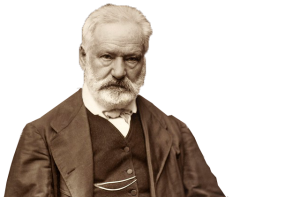 Victor Hugo (French and Arabic/1802-1885) is one of the best known writers of the French romantic period. Around the world his most enduring works are The Hunchback of Notre Dame (1831) and  Les Miserables (1862); however, within France he is also regarded as one of their greatest poets. In the service of the French language, Hugo was elected to the French Academy in 1841 where he served as a formal arbiter of the intricacies of the language until 1851. Given his political opposition to Napoleon III, Hugo spent from 1851 to 1870 in political exile, taking refuge in Brussels. Upon his death in 1885 he was given a public funeral, where he was displayed under the Arc de Triomphe, and buried in the Panthéon.