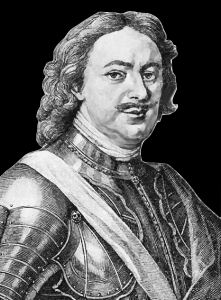 Tsar Peter I (Russian/1672-1725), widely referred to as Peter the Great, ruled over Russia from the time of his brother Ivan V’s death in 1696 until his own death in 1725. He sought large-scale reform in Russian government and society in order to establish Russia as a world power. Although the Russian aristocracy resisted, he reorganized and expanded the Russian military, restricted the influence of the Eastern Orthodox Church, and established secular education standards in schools. In 1721, he declared himself emperor of all of Russia but died four years later without an heir.