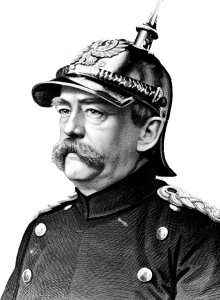 Otto von Bismarck (German/1815-1898) was a Prussian statesman who served as prime minister of Prussia and founder and first chancellor of the German Empire. He supported the unification of Germany under the rule of King Frederick William IV. Once the empire was established, he actively and skillfully pursued pacifist policies in foreign affairs, succeeding in preserving the peace in Europe for about two decades. His realistic diplomacy and domestic policies gave him the nickname “The Iron Chancellor.” He was forced to resign by King Wilhelm II after multiple disputes over policies that would eventually lead to the beginning of World War I.