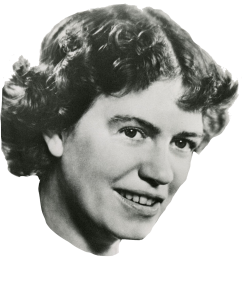 Margaret Mead (Anthropology/1901-1978) was a cultural anthropologist who is known for her research across cultures on attitudes towards sex and gender roles. In 1925, Mead conducted field work in American Samoa, which she detailed in her bestseller Coming of Age in Samoa (1928). Through her other findings over ensuing years, Mead became a vocal proponent of cultural determinism, the theory that a culture ultimately shapes an individual’s perceptions and stances on sexual behavior and general character. Mead was posthumously awarded the Presidential Medal of Freedom in 1979.