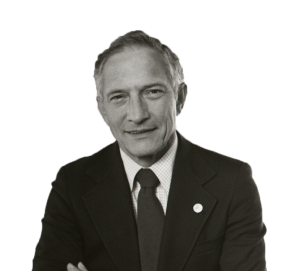 Robert Noyce (General Science/1927-1990) is the co-inventor of the integrated circuit, founder of the Intel Corporation, and one of Grinnell College’s most generous benefactors. After graduating from Grinnell in 1949 with a B.A. in physics, he attended the Massachusetts Institute of Technology where he earned his PhD. in physics in 1953. His dissertation at MIT focused on the study of transistors, which would later become the centerpiece of his most famous invention: the integrated circuit. Along with Jack Kilby, Noyce patented this invention in 1960 while working at Fairchild Semiconductor Corporation, and then founded the Intel Corporation to produce processors with this technology in 1968. Grinnell College’s Robert N. Noyce ’49 Science Center is named in his honor.