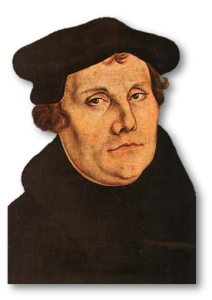 Martin Luther (Religious Studies/1483-1546) was a German professor of theology whose writings brought about the Protestant Reformation. The year 2017 marked the 500th anniversary of Luther publishing his 95 Theses, a document that identifies corruption within the Catholic Church and posits points for debate, which is supposedly posted on a church door in Wittenberg. Luther argued against the Catholic Church’s practice of selling indulgences, arguing that salvation could be achieved through faith alone. When the Pope insisted that Luther renounce his views, Luther refused, so he was excommunicated from the Catholic Church. Martin Luther translated the Bible into German, allowing Christians who did not read Latin to have access to Scripture in their own language.