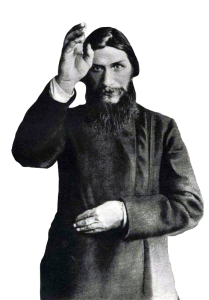 Grigori Rasputin (Russian, Central, and East European Studies/1869-1916) influenced the religious practices of Czar Nicholas II of Russia. After Rasputin failed to become a monk, Nicholas II invited him into his court to try to heal his son, who suffered from hemophilia. Rasputin quickly gained the reputation of being a “crazy, mystic healer” due to his unusual methods and inconsistent, often unreported results. Because of his mysticism and influence on Nicholas II, many people attempted to assassinate him; people stabbed, poisoned, shot, and beat him, all of which he survived. After all of these attempts, he ultimately met his death when a group of conspirators threw him, wrapped in a bed sheet, into the Neva River. This song describes the various ways in which people tried to kill him.