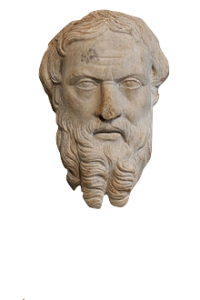 Herodotus (History/c. 484 BC-425 BC) was a Greek historian who was often considered the “Father of History“. He was the first known historian to treat historical subjects as an investigation rather than a narrative, and he focused on thoroughly investigating and collecting material. His notable work was his Histories, which focused on accounts of the rise of the Persian Empire and the ensuing Greco-Persian Wars.